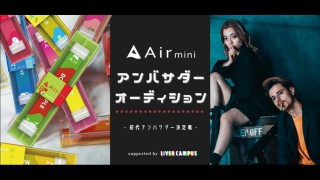 I am very happy that Mudia exists and supports artists of all kinds. I am glad that events such as Ambasador Air Mini are organised, which I am participating in for the first time.

The course of the semi-fanal B of this Ambasador Air Mini was very interesting and exciting, as we were able to witness the confrontation of participants representing different skills and artistic achievements. It was also noticeable that the criteria for choosing to support a particular performer varied widely: admiration for their work, familiarity with a particular performer, following the majority of people.

Congratulations to all the performers taking part in 【セミファイナルB】Air miniアンバサダーオーディション for their excellent participation! It was a really exciting duel, which in this group resulted in the following outcome:

In Group B, Amagumo 🥇 came in first place with 16,822 points. Amagumo is a very intriguing young person who says of herself, "I'm like rain, so I'm Amagumo. She works as a singer, songwriter, model and broadcaster under the slogan 'Anti-humanity, aim for 2.5D, Chuuni Higest'. Amagumo has a very strong personality who openly talks about having gone through depression and was interested in then Prince of Tennis during this dark period in her life. Her biggest dream is to give it her all as 'her'. It is worth visiting her Tik-Tok account (@amgm_androgy) and her Youtube channel ( @_ANDROGY_), where we can discover a unique MV of hers.

In second place with 14983 points was Haru 🥈 Haru hosts regular live broadcasts on the streaming platform 17Live. She already has a public relations project from AirMini where she was able to learn about the appeal of shisha. She has fallen in love with hookah so much that she goes for it with her friends. She uses the AirMini portable hookah, which she has already got quite a few people interested in here.

In 3rd place with 13474 points was Nana 🥉. Nana is a gogo-dancer and free model. She usually streams on Pococha. On her Tik-Tok (@channana_ayase account), you can see numerous dance-cospley style videos.

In fourth place with 9038 points was Momo. Momo usually streams on Pococha, and her biggest dream is to become an influencer. As an Air Mini Ambassador, she would like to pass on the taste she has created.

The last performer from Group B to qualify for the final with 8944 points is Emu. On the streaming platform 17Live, Emu has in her profile: "People who don't understand my charm, I started streaming for 🥀". Emu is a person full of positivity, which he always infects his listeners with. She has also gained quite a following.

Six place along with 3860 points went to Elena🦊🌺,  which has in her caption: Nice to meet you ✨ My name is Erena, a Pococharaivor❣️ I'm a mother of two in Hokkaido👶 Thank you for your time 💕.

I deliver irregularly, so please follow me if you like❤️.

Seven place along with 3105 points went to FantazyFaktory,  which is the group consists of husband and wife sIn and wife marina. sIn has been a singer since he was 15 and started composing music at the age of 18. sIn started FantasyFactory at the age of 23, but the group broke up. Then, at the age of 27, he started recruiting new members. Marina had no previous musical experience and had been running her own business, but one day she remembered her dream of becoming a musical actress and decided to quit her business to pursue her dream. They got married in February 2018 and had a musical wedding in 2019 with all original songs, including the entry "Red Carpet - To You". She will be going into full swing with her activities.

Caption on their acount on Tik-Tok:

"We are a handsome musical family.

My wife has gained 25kg and her belly has popped lol.

We will be releasing new FantazyFaktory songs on a regular basis ✨"

Eight place along with 2000 points went to Nana,  which has on her caption "Nice to meet you ✨ I'm NANA🦉💕 from ONECARAT! I'm usually delivering Pococha as my main channel! I'm an Air mini ambassador and I'd like to be active in various media relations! I want to bring you a relaxing moment with the flavours I produce!"

Caption on her Tik-Tok:

Nine place along with 320 points went to 丸凜凪,  which a real name is Marurin Nagi. She has on caption "I'm from Aomori Prefecture 🍎 and I'm active as a legal lolita idol 🔆 I'm 21 years old and started working as a model for photo shoots and underground idols when I was 17, and I've been doing various activities as an idol for the past four years ✨ Recently I've also released a gravure DVD. I have recently released a gravure DVD and am gradually expanding my activities. I applied for this audition in the hope that this Air mini audition would be a chance to expand my activities in the future. I would like to ask for your support 💕"

How about some legal lolita?"