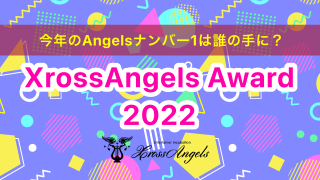 I am happy that Mudia exists and that it supports various artists and organises events like the XrossAngels 2022 Award.

This is the first time I am participating in such an event and I am very excited to see how the qualifying group A will turn out, in which we have az 6 extraordinary performers with different skills, different talents and different life stories. I will give a brief overview of them below.

ルナ is a 24-year-old performer, born in Toyama Prefecture. She is a member of XrossAngels. She is a cosplayer river singer. She started her cosplay activities as early as the third year of junior high school. She then decided to expand her skills and entered the dance department.  After graduating from the dance department at Tokyo Kokusai Gakuin High School, she worked in a digital mixing group until the age of 20. She was then active as a freelance dancer from the age of 21 to 24. At the age of 24, she was recommended by Kazufumi Sugiyama and selected for the lead role in director Eri Tsukimoto's play VANESSA. He has been a member of XrossAngels since September 2022. Cosplay, music and talks are distributed on the live distribution app BIGOLIBE!

こすげみか is a young versatile artist born in Kanagawa Prefecture. She is a member of XrossAngels. By using her innate instincts, using her senses and using her ears to hear good things, her eyes to see good things' and using her reflections, she wants to create works that will stay in people's hearts. Her main domain is songwriting, arranging, storytelling, MCS, improvisation, illustration, etc.

She can play the piano, which she started playing at the age of 2, and the drums, which she played in a brass band and in pop music clubs. She is constantly working on improving her composing, arranging and producing illustrations. She performs in over 20 live shows a year . He performs live at ZEPP TOKYO/ Sunshine Fountain Mae/StudioCube326/Takaen HIGH/Ebisu LIVEGATE/Hatsudai DOORS/ Shibuya duo MUSIC EXCHANGE/PARMS/Maebashi Terrsa Hall.

She has trained in the narration office for two years since 2014 and is an active narrator, using her clear and well-audible voice. Using the easy-to-hear voice cultivated in narration, he also performs Miss Warbler and MC selections. As of 2017, he conducts 140 corporate seminars annually.

She is also an actress in improvisation theatre, where she has been appearing since 2015 after falling in love with the depth of improvisation theatre after performing in "Otogi Yugi's Improvised Skit", a one-day performance in which a story is created based on words given by the audience. Currently participating in directing as a member of the theatre company, she performs in theatre productions.

佐伯なゆ is a young performer born in Hyogo Prefecture. She is a member of XrossAngels, a group of female performers in Hyogo Prefecture. She was involved in the security industry for a long time. Her special skills include directing the road. She has mainly worked in intaglio, on stage, as a round girl and has done other entertainment work. Nowadays, she delivers the achievements of her work almost every night in the distribution app BIGO LIVE.

篠塚ゆき is a young performer born in Niigata Prefecture. She is a member of XrossAngels. She is Yuki Shinozuka, a jazz singer-songwriter who has released albums and bromides across the country and works mainly in Tokyo. Her unique skills include a quick change of kimono, hospitality and conversational English. She has been called Japan's little Etta James. She has a powerful singing voice that is filled with music and words that cannot be imagined from her petite 144cm body. Since high school started music, HIPHOP, R&B, REGGAE, JAZZ, original etc. With a variety of music, she has performed on hundreds of stages in Japan and abroad. In the autumn of 2013, she made her nationwide debut as "Yuki Shinozuka" and released her album nationwide! Her first album "She is my friend" is also available on iTunes, Recochoku, Apple Music, LINE MUSIC, Karaoke DAM. Since 2021, her songs and chatter have been distributed on the BIGOLIVE app for live distribution. She hosts regular monthly performances on Live Channel LSC (Live Show Channel) worldwide.

Mina is a performer born in Saitama Prefecture. Belongs to XrossAngels. She is a singer and songwriter. She is not afraid to sing songs derived from different music genres such as JAZZ, POPS, ROCK, popular songs and western music songs. Since the age of sixteen, she has performed live in bars, restaurants, cafes, Yokosuka bases, ceremonial halls. Her other live activities include radio broadcasts like Urara Ichikawa FM's 'Kasuyo Nakajima, Tokimeki Thank You'. She hosts a regular MC once a month, FM Fukka-chan once a month. Owned by XrossAngels since 2020. Since 2021, her songs and speeches have been distributed on the live distribution app BIGOLIVE.

Among this diverse sixsome, it is hard to choose a favourite, as each represents a different kind of music and skills. Personally, I was most impressed by the jazz wocalist Yuki Shinozuka and the ゆっちゃん but I am very curious to see how all sic will fare in this qualification group for the XrossAngels 2022 Award.

I'm keeping my fingers crossed for everyone. I ask everyone to give it their all.