Emergenza Japan 2023 Tokyo Preliminary Round 1 - Report on the participation 🔥 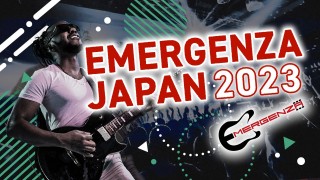 Emergenza Japan 2023 Tokyo Preliminary Round 1 - Report on the participation 🔥

I am very happy that Mudia exists and supports artists of all kinds. I am happy that there are events organised like Emergenza Japan 2023 in which I will be taking part for the first time.

As someone for whom life would be empty without music, I'm very excited about the Emergenza Japan 2023 event and I'm looking at all the performers taking part.

I have looked through the musical work of all the participants in this event and I can say that it is a very diverse group, which makes me very happy because it was an interesting duel and an evening full of emotions. The course of the preliminary round 1 was very interesting and exciting, as we were able to witness the confrontation of participants representing different musical genres and artistic achievements. It was also noticeable that the criteria for choosing to support a particular performer varied widely: admiration for their work, familiarity with a particular performer, following the majority of people.

Congratulations to all the performers taking part in Emergenza Japan 2023 Tokyo Preliminary Round 1  for their excellent participation! It was a really exciting duel, which in this group resulted in the following outcome:

Congratulations to My ass for winning first place 🥇 with a 180 000 points in this preliminary round 1. Please continue to give your best in the near future 💪.

I must admit that the very name of this Japanese rock duo on the recipient is impressive. My ass was formed in 2019 and consists of vocalist Ken, who is also the bassist, and drummer Gen. They have played many live shows in their hometown of Utsunomiya and sold out shows at KENT as part of their own project in 2021. After a six-month rest, they appeared in the 2022 edition of the Veriten Rock Festival Live House. It's worth visiting their Tik-Tok account (@myass_official) and Youtube channel (@myass_official5928) to see just how much of an original band they are. Intrigued by the band's name, I listened to, among other tracks available on Youtube, 'So wack! taken from their 1album 'Hello everyone, We are 'my ass'' and I have to say that I was drawn in not so much by Ken's vocals, but by the overwhelmingly good sound of the drums and bass. It's a solid synchronisation!

To give you a better idea of My ass's work, here are the lyrics to the song UK CITY (feat. under BRIDGE) from their first album 'Hello everyone, We are 'my ass''.

'my ass' Track に On the beats

この Groove I can not imitate

Overlooking homie in the city

This is the UB

In second place with 130 000 points was the band JUNK MARTINI 🥈 Congratulations on to the second place. Please continue to give it your all in the near future 💪 .

Junk Martini is a highly original pop music film band made up of two members (Yours and Kai). Through the music they create, the band is able to move our all senses and transport us to a cinematic world. Looking at the band's social media profile, it can be seen that the two members have divided their roles and Yours is primarily responsible for writing lyrics, composing music, singing, creating illustrations or images for films and playing guitar. Kai, on the other hand, is responsible for the vocals; creating the illustrations for the videos; and for characterisation and editing the video. They already have a track record of participating in the finals of Emergenza Japan in 2017.

Their Youtube channel is well worth a visit, where we can check out their original work, including their latest MV 'Tetra Psycho', for which the teaser is intriguing:

" It's a place where the sun never shines. I can't resist this insidious connection, even if I want to beg. This journey that will continue tomorrow I am sure I will see a different view next time. I wonder if I can believe it."

Both voices are very interesting to both Yours and Kai.

Yours' account on Tik-Tok (@yours_yua) is also worth a visit, where you can check out his original work and covers of songs by Korean band BTS like Butter and Yet to Come, among others. It should be emphasised that Yours combines playing the guitar with singing at the same time in a sensational way.

To better illustrate their work, below are the lyrics of the song 'Tetra Psycho'.

Will you get gonna do it?

Baby, it's too fake!

No, are you satisfied?

I don't care about you, ananimous

Will you get gonna do it?

Baby, it's too fake!

Third place along with 120 000 points went to 小野田恵 (Megumi Onoda), 🥉 who is a performer born in 1984. She says of herself "my desires for three generations have been the desire for appetite, the desire for sleep and the desire for the stage". She is mainly active in the Kanto region, where she performs primarily in venues such as cultural halls, live bars and event venues. In addition to her own written and composed songs, she specialises in covers of hits from the 1960s to the 1980s. In addition to singing, she is a versatile entertainment businesswoman, such as MC at various events, choreography, dance performance, instructor of dance and singing lessons and producer of events. On her blog on Ameblo, we can get a glimpse of her dance choreographies, into which she weaves jazz music. On her Youtube channel (@megumimusou), on the other hand, we can learn about her numerous live performances. Megumi has an interesting, strong voice and she also dances well.

Four place along with 100 000 points went to CAFUNÉL. Cafunel is a big family band that tastes three times better than one. The band's name comes from the Portuguese word 'cafune', which means 'the way you gently comb your fingers through your loved one's hair'. They play light-hearted music that touches the heart, but at the same time their performances are capable of getting you up and dancing. Each of their performances is different. The amazing thing is that the vocals change with each song. The line-up sometimes changes too. Even the genre changes. They deliver a variety of songs, one of which is sure to appeal to many listeners. Their current line-up is:

To better illustrate Cafunel's work, below is their beautiful song 'Bird of Paradise'."

Five place along with 90 000 points went to band Two-Headed Boy. They are a mystery to me as I couldn't find any information about them 😭. Does anyone know what kind of music they play or anything more about them?

Six place along with 80 000 points went to TranS-O-.  TranS-O- has a growing number of supporters here. Hailing from Tokyo, it is the mysterious O-9 (Eye of the Young Vocalist) project [TranS-O -] that wants to carry the message "no matter how imperfect you are, no matter what complex you have remain a soul, send freely without being controlled by anything ". Oku's motto is to enjoy expression without fear or inspiration. It's the body, what you feel, because it's the soul. Inspiration is a range of possibilities. Put everything that pours out into free sounds, thoughts and words. It is worth visiting his channel (@trans-o-6196) on Youtube to get a closer look at the work. I, for one, have some feelings of similarity with Gackt. Oku has a strong, slightly hoarse, original tone of voice. You will notice that he also likes the visual kei style. On her channel, she has numerous songs of her own but also covers, including a song translated into Japanese called 愛の讃歌 (Hymne à l'amour) by Edith Piaf. The world she creates is magical and I am not surprised that she has a growing following.

The last place along with 60 000 points went to Fanny Hill.

Formed in 2019, Fanny Hill is a four-members band creating music incorporating sounds from ska punk, post-punk and new wave. How they refers to herself is an enjoyable and exciting Lollipop band  with headquarters and main activities in Tokyo. It is noteworthy that the banďs vocalist Asei lwamoto is aIso a guitarist and brilliantly combines both. The other members of the band are: Kosuke Kikutani (Guitarist), Dorji (Bassist), Atsushi Tada (Drummer, who joined the band in 2022). With their slogan "Play, youth! " they want to create music that energises people. It is worth visiting their Youtube channel and checking out their EP Don't, which consists of four original songs. In my opinion they have a bit of rock & roll and I don't know why I thought of The Beatless when listening to Do you Remember. Their Youtube channel is worth a visit, as the band released their second MV 'Sea Bass Fishing' this November, which introduces us to a worl d of playful punk. Among the performers of Otonova2023, they were probably the only group offering such sounds. To better illustrate their work, below are the lyrics of their original song 'Sea Bas Fishing'.

It was a very interesting event. Congratulations once again to the winner of 'My ass'. I look forward to future editions of this amazing project.